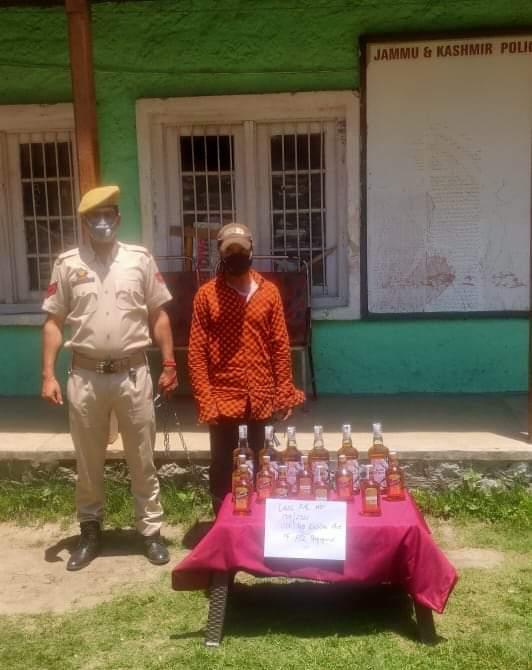 Kulgam Police (Jammu and Kashmir)its unwavering efforts to eradicate the menace of drugs from the society, Today, Police patry from Police Station Qazigund led by I/C SHO Qazigund Sub Inspector Imtiyaz Malik under the supervision of SDPO Qazigund established a naka at Damjen crossing on NHW.

At about 1000 hours, during Naka checking one per person roaming in suspicious manner was stopped for checking.

However the said person tried to flee from the spot after noticing Police party, but with strenuous efforts he was apprehended tactfully and 15 bottles of illicit Liquor were recovered from his possession.

He has been identified as Basharat Ahmad Sheikh S/O Mohd Ramzan Sheikh a Resident of Checki Rajwali Vessu.

In this connection case with FIR No. 134/2021 U/S 48 Excise Act has been registered in Police Station Qazigund and investigation has been initiated.

Community members are requested to come forward with any information regarding drug peddlers in their vicinity.

Persons found indulging in drug peddling or any other anti-social element will be dealt strictly as per law.